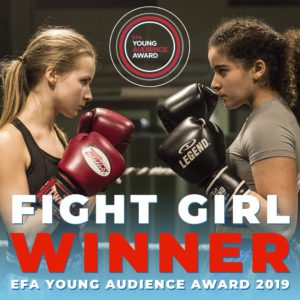 Children (aged 12 to 14) of 55 European cities from 34 countries have chosen the Dutch-Belgian production FIGHT GIRL by Johan Timmers as this year’s laureate of the EFA Young Audience Award, the best European youth film. The main role of the youthful Bo is played by Aiko Beemsterboer. Flemish actress Hilde De Baerdemaeker plays her mother in the film. The script was written by Barbara Jurgens. FIGHT GIRL was produced by The Film Kitchen (The Netherlands) and co-produced by A Private View (Belgium). FIGHT GIRL world premiered during the Dutch Film Festival 2018.

After watching the three nominated films, 2800 young film lovers from all over Europe were able to cast their vote.The results from all countries were collected via a live video connection in Erfurt (Germany), where former YAA jury member Ivana Noa from Belgium led the award ceremony. This could be followed online via a live stream and remains available on the website of the European Film Awards.

FIGHT GIRL is made with the support of the Flanders Audiovisual Fund (VAF), Belgian Tax Shelter – Casa Kafka Pictures, the Dutch Film Fund, The Netherlands Film Production Incentive, CoBO and AVROTROS. Fight Girl was released in March in Belgium by September Film. It is now available on dvd.

The EFA Young Audience Award was organized and presented by the European Film Academy and EFA Productions with the support of Mitteldeutsche Medienförderung (MDM) and Creative Europe – the media program of the European Union.