THE BEST OF DORIEN B. to open Ostend Film Festival + trailer release!

THE BEST OF DORIEN B., the debut feature of Anke Blondé, will screen on the opening night of the Ostend Film Festival, celebrating its national premiere. The festivals announcement was the perfect moment to release the trailer and the poster of the film!

“The thirteenth edition of the festival is all about Leading Ladies”, says Peter Craeymeersch, artistic director of the festival. “We always choose to open with a Flemish film and THE BEST OF DORIEN B. also fits perfectly with the theme of the festival. Anke is certainly one of the directors to keep an eye on. THE BEST OF DORIEN B. immediately appealed to me. The story is taken from life and is played by a surprising but very strong cast. Leading actress Kim Snauwaert will undoubtedly become one of the discoveries of the year. I was present at the worldpremiere in Rotterdam where the Dutch audience fell in love with Dorien B. and I am convinced that the film will touch our visitors as well!”

This year’s festival master is actress Lynn Van Royen, known for the television series BEAU SÉJOUR and THE TEAM 2. She will introduce her Master Selection of her favourite films on ‘Leading ladies’ at the festival, making THE BEST OF DORIEN B. the perfect introduction. The film stars newcomer Kim Snauwaert and Jelle De Beule as her husband. Dirk Van Dijck, Katelijne Verbeke, Wine Dierickx and Robrecht Vanden Thoren play supporting roles in this comic drama about a woman rediscovering herself amidst all the chaos. 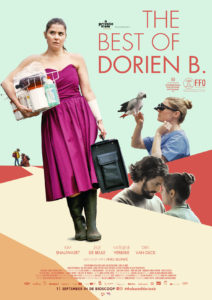 “I am really happy that THE BEST OF DORIEN B. will open the Ostend Film Festival”, Anke Blondé stated at the press conference. “The film is incredibly important to me, I wanted to tell the story of Dorien B. for a long time. I hope the film is recognizable and inspiring for women and men who, just like Dorien B., have lost their way and their dreams for a while. But I especially hope that they can enjoy the film. I have often been a guest at the opening night of the festival and it is quite exciting that this year the honor will be for my own film.”

Anke Blondé and Jean-Claude van Rijckeghem wrote the screenplay for THE BEST OF DORIEN B., which started its international career at the Rotterdam International Film Festival (IFFR) in January 2019 and has since also visited the film festivals of Beijing (China) and Lucca (Italy). The Belgian audience can discover the film at the beginning of September. The film will be screened in both Kinepolis Ostend and Kursaal on Friday 6 September. A few days later, on September 11, THE BEST OF DORIEN B. will be released in Belgian cinemas by Kinepolis Film Distribution (KFD).

The film was produced by Dries Phlypo for A Private View. THE BEST OF DORIEN B. was created with the support of the Flanders Audiovisual Fund (VAF), the Dutch Film Fund, Eurimages, Creative Europe – Media, Casa Kafka Pictures, the Ghent City Film Fund and Telenet. International sales is with Be For Films.