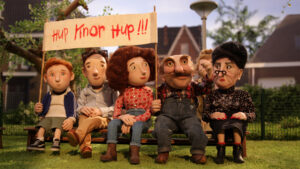 Festival (10 Feb. ’22 – 20 Feb. ’22). This ingenious stop-motion film is a co-production between the Belgian production house A Private View (Dries Phlypo) and the Dutch Viking Film (Marleen Slot). Dutch Mascha Halberstad, who also produced the children’s series Vos en Haas, directed the film and Fiona van Heemstra wrote the screenplay. The film will be released in autumn 2022 in Belgian cinemas and will be distributed by O’Brother.

“Production on Oink started with the first lockdown, but since we were shooting indoors in a studio with stop-motion technology, the Covid-19 rules hardly bothered us,” says Dries Phlypo, producer of A Private View. “This animated film is full of absurd humour that young and old will enjoy. The selection in Berlin is a stamp of quality that the film more than deserves.”

the world for young audiences. Authentic stories, reality through a haze of imagination or life in all its harshness: these are the ingredients for the quirky, coming-of-age stories they show.

Babs receives the pig Oink from her grandfather in America for her ninth birthday. Her parents are not very happy about it. Only on the condition that Oink follows a puppy course, Babs is allowed to keep him. But then granddad turns out to have other plans with Oink. He enters the sausage competition of the Association for Meat Products from Fresh Pigs…

A Private View is a Ghent production house of Dries Phlypo and Jean-Claude van Rijckeghem, focusing on strong stories and contemporary themes. Over the years, they have produced more than 50 films and drama series. This year, for example, the feel-good film My dad is a sausage by Anouk Fortunier was released and the Streamz original series Storm Lara starring Ella Leyers was broadcast.

Viking Film is the Dutch production house of Marleen Slot that focuses on making arthouse films and animated films. Recently she produced Sacha Pollak’s Dirty God, which was selected for Sundance.